Greenfields Veterinary Hospital prides itself on having fantastic veterinarians and veterinary nurses with a diverse range of interests and skills that help provide comprehensive and compassionate care for your pet. The practice has grown rapidly since its establishment and has continued to seek only the most compassionate and dedicated team members.

As part of our ongoing commitment to providing the highest standards of care, our veterinarians and veterinary nurses continue to attend ongoing education seminars to ensure they are up to date with the latest advancements in veterinary medicine and surgery. 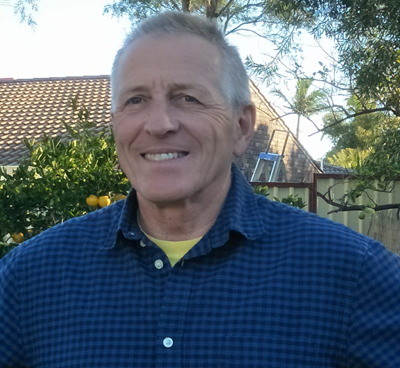 Dr Markus was born and raised in Switzerland where he obtained his Veterinary degree and worked in farm animal practice before moving with his family to Australia in 1991.

After undertaking further qualification through Murdoch University in 1996 Dr Markus worked in mixed practice in the Southwest of WA for 3 years before moving to England and working in Emergency Practice for 13 years.

Now Dr Markus has settled back in WA and brings his wealth of experience with him to care for the pets at Greenfields Vet Hospital. 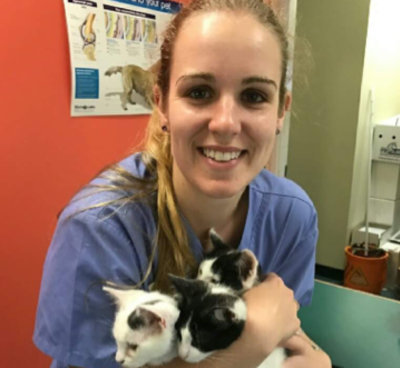 Michelle has commenced 12 months of Parental Leave in December 2020.  Congratulations on the arrival of a baby boy in January 2021!

Michelle has been with us at Greenfields Vet Hospital as part of the nursing team since 2015. She graduated Murdoch University as a veterinarian in 2018 and brings with her a wealth of enthusiasm and a love of helping people and animals alike. 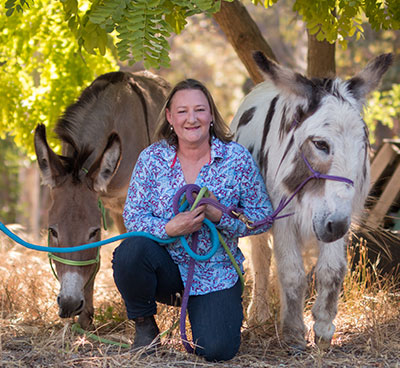 I joined the Greenfields team in 2021.

My love of creatures great and small began in Africa where I spent my early childhood. I lived in the UK for 14 years before emigrating to Australia.
I worked as a veterinary nurse and for State Government before deciding to pursue my dream of becoming a veterinarian and undertook the degree as a mature-aged student. I love to be able to make a positive difference in the lives of animals as well as helping the people that care for them.

I share my life with my husband and family, two donkeys, (Dusty and Henry), three horses (Heineken – the grump-monkey, Tess and Smooch), two greyhounds (Daisy and Noodles), and two Cornish Rex cats (Darth Maul and Yoda). In my spare time, I love horse riding, drawing/painting, reading, and making soap. 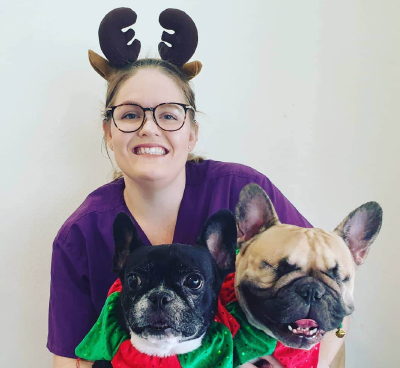 After starting work in the Veterinary Industry as a part time kennel hand while doing her last year of high school in 2007, Naomi continued on with the hospital in Rockingham and completed her studies in 2010 and became a qualified veterinary nurse.
In 2012 she was given a great opportunity to work in a large veterinary hospital in Singapore. During the 8 years she was in Singapore she had the chance to work with some interesting animals such as the local macaques, chinchillas, hamsters and hedgehogs.
She also had the chance to work with the specialist Japanese cardiology team. As they flew over a few times a year to perform mitral valve repair (open heart surgery) on Singapore cardiac patients.
Naomi loves to travel and during her time in Singapore she travelled to many places a few being; Greece, Spain, Italy, Vietnam, Japan and the UK.
Naomi has 2 French Bulldogs named Bijoux and Demetra – who unfortunately had an uncommon disease called primary glaucoma which means she went blind and had to have her eyes removed. But she is such an amazing dog and leads a happy life :)
Naomi joined the Greenfields team after migrating back to Perth in 2020. 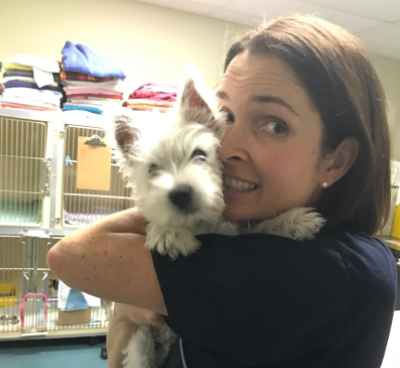 Cathy comes from a corporate background. She completed a Bachelor of Business Degree twenty odd years ago.  Her and her husband chose to live a bit more and work a bit less as they approached 40 which gave her time to think about what she really wanted to be when she grew up.

She’s been vet nursing part-time ever since. More than ten years on, Cathy still loves her job. Tennis and walking her two children, a Westie named Charly, and Bruce a Mini Schnauzer, keep her pretty busy, but she wouldn’t want it any other way.” 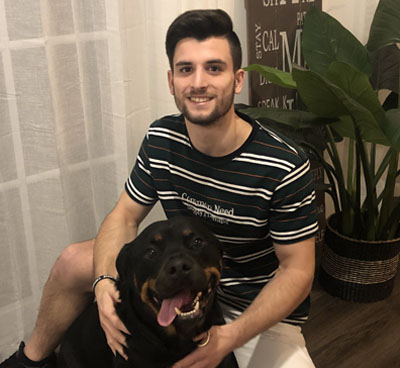 My name is Aaron Edwards. I’ve been a part of the Greenfields family since Dec 2018.

Before I started at Greenfields Vet Hospital  I was an instructor at Moorey’s Martial Arts for 10 years. In my spare time I still love to train and teach martial arts and enjoy learning new skills for my current chosen profession.

I currently have a Rottweiler named Bruce who loves stealing socks from wherever he can, and a Stimpson Python named Madonna. 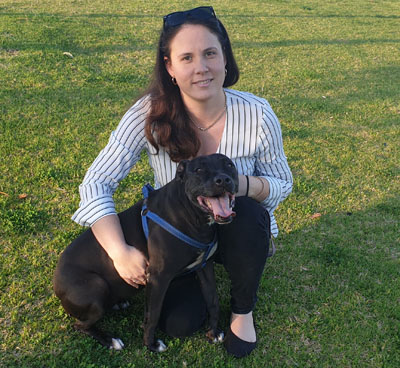 Hi my name is Kahlia, I joined Greenfields Vet Hospital in October 2018. I have completed my certificate II in Animal studies and currently studying Certificate IV in Veterinary Nursing.

At home I live with my 2 dogs a staffy, Shih Tzu x Maltese and our Russian blue cat. In my spare time I enjoy spending time with my animals and family. 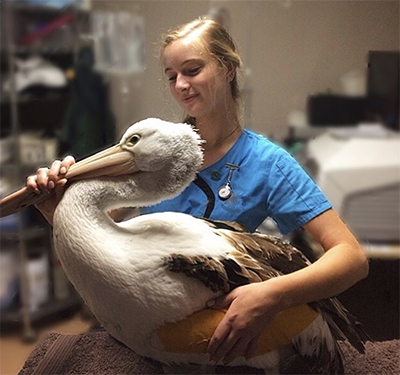 Alexis is one of our Registered Veterinary Nurses. She was born in South Africa and moved to Perth in 2009.
She graduated Certificate IV in Veterinary Nursing in 2016 and has been caring for our furry friends ever since.
Originally nursing in the Perth area, she relocated to the Mandurah-Peel area mid 2019 with her partner and cat Tinkybells.
Predominantly a small animal nurse (dogs and cats), Alexis has also worked with a lot of exotic pets, native wildlife and seabirds!
Being a lover of the ocean Alexis loves to snorkel and spend time on the boat during her days off.

Rachel is currently studying towards becoming a veterinarian at Murdoch Uni. She has known that a vet is what she has wanted to be since she was in kindergarten.
Rachel also works as a lifeguard for the City of Mandurah, and in her spare time she loves watching movies, cuddling with her dog and riding horses. Although she doesn’t live on a property (yet), she has spent the last few years leasing a horse and competing in various showjumping and crosscountry events, and loves casual rides on the beach.

Her favourite memory is that of when she was surprised on her 14th birthday with a little Maltese X puppy called Chloe from the pound. Ever since, she has loved teaching Chloe tricks and taking her for long walks out in the bush with friends. Poor Chloe has to put up with a lot of vet practice on her! 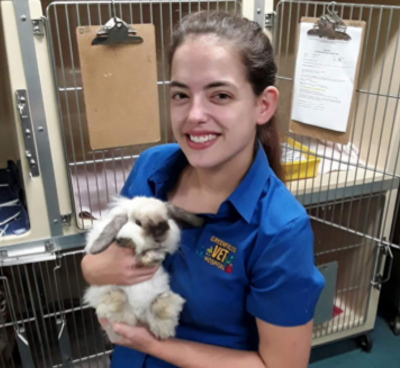 After being in retail for many years Zoe decided to finally pursue a career with animals. She is currently studying Vet nursing while working with us. She loves travelling and has been to Europe and South Africa and is planning on exploring more!

She has two rescue dogs at home and can’t wait to further her career in the animal care industry.